A Review by Ryan Woodruff

I spent this past weekend in Raleigh at the Wolfpack Speed & Power Camp, hoping to soak up some knowledge and tips from Coach Todd DeSorbo and the NC State coaching staff.  The camp was billed as “1.5 days of roaring explosiveness” and DeSorbo kicked it off by describing Wolfpack practice as “literally organized chaos.”  Both seemingly hyperbolic descriptions turned out to be surprisingly accurate.

Part training session and part coaching clinic, the focus was totally on sprint freestyle (as advertised).  Swimmers 13 & over were taught the drills, technical philosophy, and training philosophy that the Wolfpack has employed over the last 4+ years as they dramatically ascended the NCAA ranks. DeSorbo, Bobby Guntoro, and the rest of the staff were very interactive with the campers, who got a compressed experience of what it’s like to train in the sprint group at NC State.

As a coach, I loved learning the innovative drills, unique philosophy, and weekly training plan.  But the thing that made the most impact on me is how much this staff absolutely LOVES to coach.  Their energy and enthusiasm on deck is contagious.  After a few other coaches and I watched the campers run through their drills, we stayed and observed the college team’s practice.  After a brief team meeting, the beats started pumping and speed was all over the place — it was a symphony of chaos and freakishly fast swimming. 24 hours later I am still shaking my head about how intense, fun, and alive that workout was. 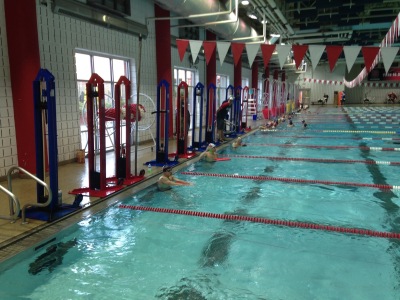 On the second day of camp, swimmers got to train with Power Racks, Power Towers, and Drag Sox, using the same protocols that DeSorbo has concocted for the likes of recent Short Course 100 freestyle World Champion Simonas Bilis and Olympic Gold medalist Ryan Held.  The coaches got to observe a collegiate weightlifting session and had a technical Q & A with sprint whisperer Guntoro.  Camp concluded with the Raleigh Rage Shootout, an exciting tournament-style 50 free competition.

I came away with a ton of new ideas and concepts to ponder, and at a $150 price tag, the camp was a bargain.  If I can manage to incorporate even a fraction of what I learned into my program, my swimmers will be better for it.  Next year, I plan to encourage my swimmers to attend and would 100% recommend the camp to any coach interested in maximizing the sprinting ability of his athletes. 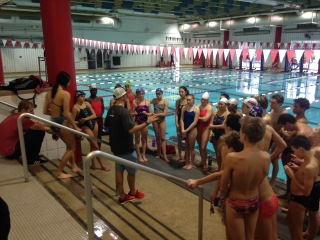 MID-DISTANCE OVER-DISTANCE ACTIVE REST WITH GPAC from Coach Greg Johnson, Greater Pensacola Aquatic Club, Florida
#Repost @matleroy72
Butterfly, Free, and Speed Kicking with Ryan Woodruff @lynchburg_y_swimming .
Freestyle Challenge Set with Ryan Woodruff, Lynchburg YMCA
Sprints and 200s No Breath​ with Coach Emily Wylam, University of Rochester. NB = No Breath.
University of Rochester Sprint Set with Coach Emily Wylam. “On the partner pulls, I told them to be as unhelpful to their partners as possible. They really took it to heart!”.